0
Continuing our series about subjects taught to K-12 students in school, we ask questions about why and how music is taught to children and teenagers. Given the wide range of contemporary thinking about individual identity, heritage, and global citizenship, our conversation covers more than the usual U.S. curriculum. Our guests include Steve Wilder Blumenthal, a composer working in television, film, commercials, and videogames (Steve also composed the music for Reinventing School); high school teacher and Marching Band Director Scott Slutter in Pennsylvania (who taught Steve Blumenthal, and inspired him to pursue a career in music); Alice Tsui, Founding Music Teacher and Arts Coordinator at PS 532 New Bridges Elementary, an arts-integrated public elementary school in Crown Heights, Brooklyn; Coty Raven Morris, Director of Choirs at Crosby High School in the Houston area, and Brandi Waller-Pace, Founder and Executive Director of Decolonizing the Music Room. Composer Steve Wilder Blumenthal has worked on a great many projects for film, TV, video games, and the web. Most recently, he wrote the award-winning score for Rob Husted’s comedy Lost Treasure of the Valley, which has also won multiple awards for Best Comedy Film. He has also written music for Home Before Dark starring Brooklynn Prince and Jim Sturgess on Apple TV+; upcoming game Burden of Scars, and Novel Effect, a multi-award-winning interactive voice-recognition app. He has written the music for the award-winning stop-motion animation, Pirouette; and for the web series Convenience Store Diet, by TripTank director Andrew Racho. Steve has also worked on ad campaigns for Microsoft, Mitsubishi Electric, Chevron, and T-Mobile. Steve has also made appearances as a guest lecturer at Carnegie Mellon University and La Salle University. Originally from Philadelphia, and a graduate of Duquesne University in composition, Steve is now based in Los Angeles. 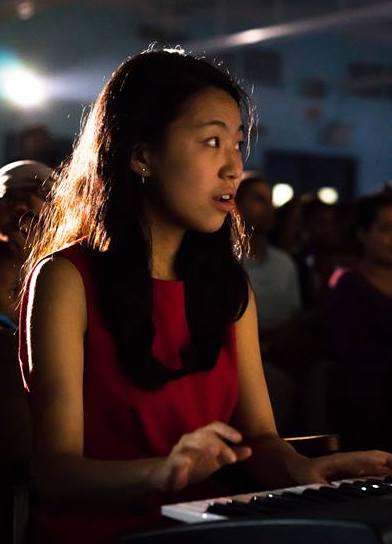 Alice Tsui is an Asian American/Chinese American pianist, music educator, scholar, activist, and lifelong Brooklyn, New Yorker. She graduated from New York University with a Bachelor of Music in Piano Performance and a Master of Arts in Music Education and is currently a doctoral candidate (ABD) in music education at Boston University. Alice is the founding music teacher at P.S. 532 New Bridges Elementary, an arts-integrated public elementary school in Crown Heights, Brooklyn, and is on the piano faculty at the Manhattan School of Music Summer program. As a product of the NYC public school system, Alice is passionate about decolonizing, anti-racist, abolitionist public music education and empowering the individual and collective voices of youth through music as expression. Brandi Waller-Pace is a singer, songwriter, multi-instrumentalist, educator, and activist based in Fort Worth, TX. Born and raised in Atlanta, GA, Brandi attended Howard University in Washington, DC, where she received a Bachelor's and Master of Music in Jazz Studies. At Howard, she was a member of the critically-acclaimed vocal ensemble Afro Blue and shared the stage with Geri Allen, Carmen Lundy, Andy Bey, Jimmy Cobb, Nnenna Freelon, and Bobby McFerrin. After college, she relocated to Fort Worth, TX, where she began teaching music in the Fort Worth Independent School District. She is an artist-in-residence at Arts Fifth Avenue, where she teaches and performs. Brandi performs with several local groups in many genres: jazz, bossa, pop, old-time, and neo-soul. As half of the duo Pace & Barber, she has performed at the Austin String Band Festival and the Austin Friends of Traditional Music Mid-Winter Festival. Brandi is the Founder and Executive Director of Decolonizing the Music Room, a nonprofit that uses research, discourse, and training to center BBIA (Black, Brown, Indigenous, and Asian) voices, knowledge, and experiences and challenges the historical dominance of white Western European and American music, narratives, and practices that has resulted in minimization and erasure throughout music education. Coty Raven Morris is a proud alumnus of Texas State University-San Marcos where she studied with Drs. Lynn Brinckmeyer, Jonathan Bacock, and Joey Martin. She received her Masters of Music in Choral Conducting from Michigan State University in the Spring of 2020 under Drs. David Rayl, Jonathan Reed, and Sandra Snow. She is currently the Director of Choirs at Crosby High School in the Houston area. Prior to this, she was the Outreach Choir Director at the MSU Community Music School, Assistant Director of the MSU State Singers, and Music Director at Grand Ledge United Methodist Church. Her choirs received consistent Sweepstakes & Division I ratings at UIL and choral festivals.    Morris was the recipient of the Hays CISD Linebarger Academic Recognition Award for 2013 & Galena Park ISD's Dazzling Diamond Award in  2014, 2016, 2017, and 2018  for outstanding mentorship and leadership in her field. She has presented at educational conferences and professional developments across the country including the Texas Music Educators Association, Michigan Music Conference, and the National Association for Music Education. She is a sought-after clinician in and out of the great state of Texas. She most recently was the clinician for Georgia Music Educators (GMEA) District 5 Elementary Honor Choir and the Region 20 HS Tenor-Bass Honor Choir. Her future engagements in 2020 include Region 11 Treble Choir Clinician/Conductor and Baylor University Women’s Choir Festival Clinical/Conductor. Morris has been a choir member of the South Texas Vocal Artists and has devoted over a decade of summers to working as a camp director at the Texas State University, Northwestern University, and Lamar University Music Camps.  Coty Raven Morris the Founder of Being Human Together, a budding music education community striving to normalize difficult topics in our field through conversation and connection. BHT seeks to discuss traditionally taboo topics like mental health, systemic oppression, diversity, and inclusivity.

Howard Blumenthal created and produced the PBS television series, Where in the World Is Carmen Sandiego? He is currently a Senior Scholar at The University of Pennsylvania, studying learning and the lives of 21st-century children and teenagers. He travels the world, visiting K-12 schools, lecturing at universities, and interviewing young people for Kids on Earth, a global platform containing nearly 1,000 interview segments from Kentucky, Brazil, Sweden, India, and many other countries. Previously, he was a nationally syndicated newspaper columnist for The New York Times Syndicate, and United Features. He is the author of 24 books and several hundred articles about technology, learning, business, and human progress. As an executive, Howard was the CEO of a public television operation and several television production companies, and a state government official. Previously, he was a Senior Vice President for divisions of two large media companies, Hearst and Bertelsmann, and a consultant or project lead for Energizer, General Electric, American Express, CompuServe, Warner Communications, Merriam-Webster, Atari, and other companies.