CLICK HERE FOR THE RECORDINGS OF THE MICROSCHOOL SUMMIT

You need to be a member of Learning Revolution (free) to see the recordings page. Join here.

Our first 2022 LearningRevolution.com mini-conference: "The Microschool Summit - Changing education, one small school at a time!" will be held online (and for free) on Thursday, May 19th, 2022. The focus for this event will be the actual starting of small schools.

Small schools have been around as long as humans have been teaching their children. One (or more) caring adult who seeks to empower youth to learn the skills and wisdom needed to lead a productive life in the community. Education today has become large and focused on many things beyond the needs of learners, such as tests, curriculum and assessment. The pandemic has shown a spotlight on the serious limitations of systemic education, and has caused many to take the learning of their children into their own hands.

Homeschooling, pandemic pods, and microschools are all ways that families have chosen to provide their children with a smaller, more child-centered learning environment. Join us at the first in a series of Microschool Summits to explore microschools, their origins, and their potential to reshape education, one student and one small school at a time.

This is a free event, being held live online and also recorded.
REGISTER HERE
to attend live and/or to receive the recording links afterward.
Please also join the LearningRevolution.com network to be kept updated on this and future events.

Everyone is invited to participate in our LearningRevolution.com conference events, which are designed to foster collaboration and knowledge sharing among information professionals worldwide. Each three-hour event consists of a keynote panel, specific individual sessions, and a closing keynote.

Participants are encouraged to use #microschools and #microschoolsummit on their social media posts about the event. 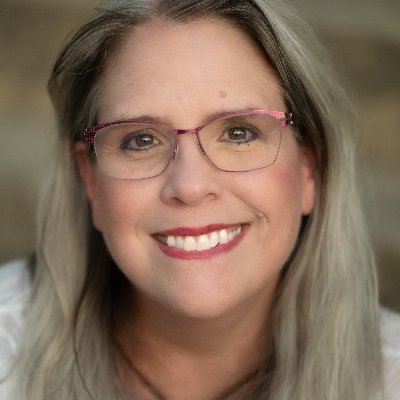 Dr. Mara Linaberger believes that each of us has chosen to be here at this moment in time for a specific reason—that we are each on a mission that we chose for ourselves. And that figuring out what we love, what we’re good at, and how we can be of service is the engine we need to fuel a lifetime of joyful learning. Mara also believes that school often slows down or stifles that excitement for students. So she is on a mission to create a global network of 100 microschools in the next 20 years—to harness education toward helping amazing children to develop their highest potentials while making learning fun again!

Mara is a life-long educator, author, technologist, artist, ballroom dancer, and musician, having spent 25 years in service as a public school educator, teacher trainer, and administrator. Completing a doctorate in Instructional Technology, she went on to earn a Superintendent’s Letter of Eligibility in Pennsylvania. Launching Mindful Technology Consultants in 2013, she continues to train teachers at the masters level on the use of digital portfolios as alternative assessments and on bringing mindfulness practices into the classroom.

Mara is the international two-time best selling author of HELP! My Child Hates School and The Micro-School Builder’s Handbook. Mara currently lives in Harmony, PA, with her husband Michael while she travels far and wide, directly supporting clients in her global Microschool Builders programs. 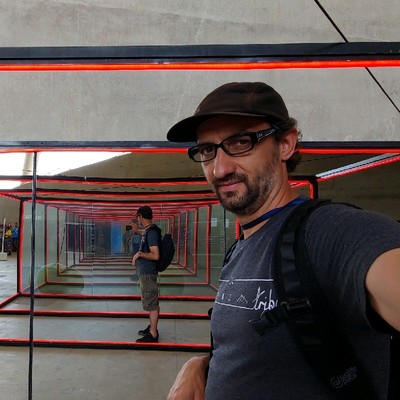 Henry is the grandson of A.S.Neill and a former pupil of Summerhill School. He taught music at Summerhill for ten years and he is currently a deputy principal. He has been travelling the world talking about education and helping people start up their own projects and giving advice on how to implement A.S.Neill’s educational philosophy. He is also a co-founder of the A.S.Neill Summerhill CIC. 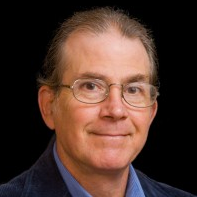 Chris Mercogliano was a teacher at the Albany Free School for thirty-five years and stepped down as director in June 2007 to concentrate on writing and speaking about non-controlling education and child-rearing. He is a member of AERO's Board of Directors. He is also the author of Making It Up As We Go Along, the Story of the Albany Free School (Heinemann 1998), Teaching the Restless, One School's Remarkable No-Ritalin Approach to Helping Children Learn and Succeed (Beacon Press 2004), How to Grow a School: Starting and Sustaining Schools That Work (Oxford Village Press 2006), and In Defense of Childhood: Protecting Kids’ Inner Wildness (Beacon Press 2007). Currently Chris is a regular columnist for Encounter magazine. He has been featured on National Public Radio’s “All Things Considered,” Canadian Broadcasting Corporation Radio's “Ideas,” and other nationally syndicated radio shows. The father of two wonderful daughters, he lives with his wife Betsy on a one-acre farm in downtown Albany, New York. 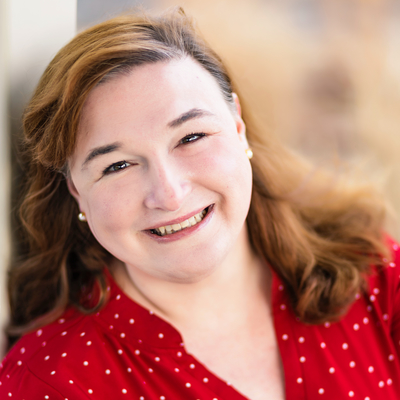 Gina Riley, Ph.D. is an educational psychologist, Clinical Professor, and Program Leader of the Adolescent Special Education Program at CUNY – Hunter College. Dr. Riley has over fifteen years experience working with teens diagnosed with learning disabilities and emotional/behavioral disorders. She is also a seasoned academic, with years of teaching, research, and supervisory experience within the fields of special education, psychology, school psychology, and mental health counseling. In addition, Dr. Riley has extensive experience in online education and distance learning at the college/university level. She is known internationally for her work in the fields of homeschooling, unschooling, and self-directed learning. 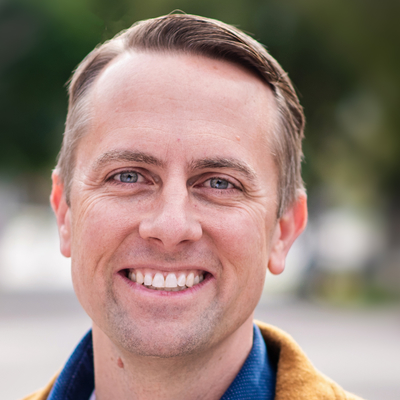 Kelly Smith has been obsessed with learning and building things since childhood. After getting a master’s degree in nuclear fusion (MIT), Kelly held engineering and marketing roles at various technology companies. While volunteering at an afterschool code club at the library, he got excited about the power of self-learning. He started a microschool around his kitchen table in January 2018. He is the founder and CEO of Prenda (prendaschool.com), an education company that helps people run microschools out of their homes. Kelly lives in Mesa, Arizona with his wife and four children. 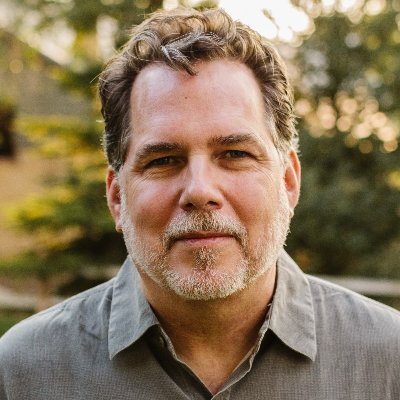 Steve Hargadon is the founder and director of the Learning Revolution Project, the host of the Future of Education and Reinventing School interview series, and the founder and chair (or co-chair) of a number of annual worldwide virtual events, including the Global Education Conference and the Library 2.0 series of mini-conferences. Steve's work has been around the democratization of learning and professional development. He pioneered the use of live, virtual, and peer-to-peer education conferences. He popularized the idea of "unconferences" for educators, built one of the first modern social networks for teachers in 2007 (Classroom 2.0), and developed the "conditions of learning" exercise for local educational conversation and change. He supported and encouraged the development of thousands of other education-related networks, particularly for professional development. For over a decade, he has run a large annual ed-tech unconference, now called Hack Education (previously EduBloggerCon). He blogs, speaks, and consults on education and technology, and his virtual and physical events and online communities have over 150,000 members. 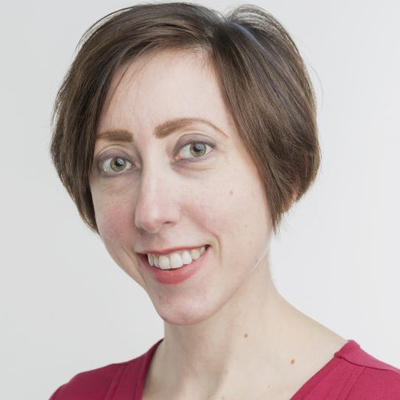 Ms. Ring is a licensed educator specializing in multisensory-based methodologies and a microschool teacher-leader for over a decade. Her broad experience in the education field has included sales, marketing and administrative positions with prominent companies such as Kaplan, Inc. and Pearson Education, but her passion remains working directly with students in a teaching capacity. As such, she continues to guide classes, as well as some tutoring sessions. Her desire to create more personalized experiences for youth led her to the founding of Meridian Learning in 2008. An early and continuous advocate of a “less is more” approach to learning, she is honored to be among the first innovators of the microschool movement. 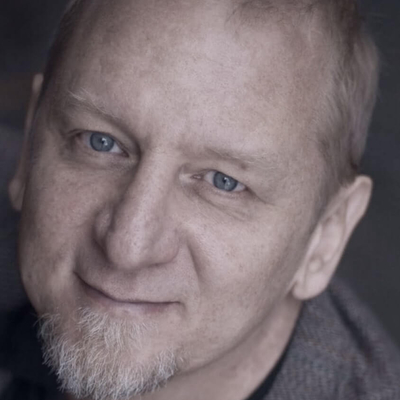 Michael Strong is one of the most experienced designers of innovative school programs in the United States. His projects include a public school program in which minority female students gained four years’ worth of critical thinking gains in four months (on the Watson-Glaser). He later went into Montessori secondary school program design at The Judson Montessori School (San Antonio), The Emerson School, and Hacienda School. He created The Winston Academy, where middle school students passed AP exams, making it the most academically advanced school in the country at the time. Another of Michael’s projects, Moreno Valley High School, a Paideia charter high school, was ranked the 36th-best U.S. public high school by Newsweek. More recently he co-founded KoSchool in Austin, Texas, which combined his high-performance approach to AP coursework and SAT score gains with a focus on entrepreneurial and creative projects. KoSchool, in turn, became the original model for The Academy of Thought and Industry, the high school model for the largest Montessori network in the United States. Students from Michael’s schools have been admitted to Harvard, Stanford, Georgetown, Smith, Bard, Bennington, McGill, UT-Austin, University of Colorado, the Hebrew University of Jerusalem, Parsons School of Design, Quest, St. John’s and many dozens of other post-secondary institutions. He is the author of The Habit of Thought: From Socratic Seminars to Socratic Practice and lead author of Be the Solution: How Entrepreneurs and Conscious Capitalists Can Solve All the World’s Problems. 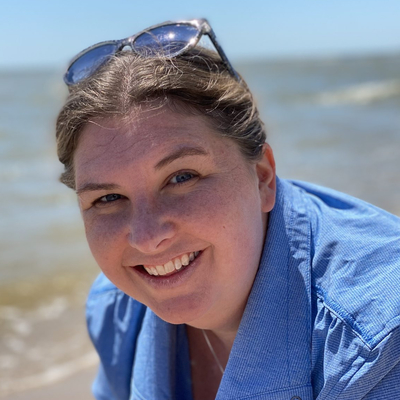 Amy Marotz helps highly sensitive students to reawaken their love of learning in just three months. Moving into its fourth year of operation, Amy’s microschool expanded to a farm space in fall 2020 to offer students more opportunities for self-directed, experiential, outdoor learning. Amy graduated with honors from St. Olaf College in 2002 with a double major in English and Studio Art and obtained a teaching certification and a Masters of Education from Bethel University in 2004. Her formative teaching years were spent instructing 5th-8th grade English at Minneapolis Academy (a college prep school for predominantly low income families) for three years. During these summers she taught Art for K-5th grades with the St. Paul Academy summer art program. When it came time to send her daughter to first grade, Amy knew she could provide exactly the environment that Alex needed to thrive. Amy jumped into homeschooling head-first and never looked back. In 2017, as a direct response to requests from her network marketing and entrepreneur family and friends, she decided it was time to start a new chapter and welcome more students into the fold. She is an officially recognized nonpublic (private) school in the state of Minnesota. When Amy expanded to a stand-alone farm school location, she also welcomed three new staff members! 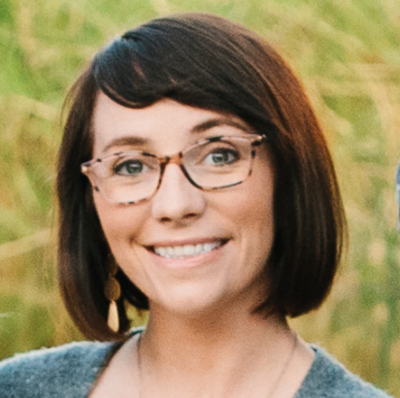 Kaity Broadbent serves as Head of Learning at Prenda. Prenda is on a mission to empower learners by helping families and entrepreneurs create learning environments where young humans can thrive. Prior to Prenda, Kaity was a Speech Language Pathologist. She worked with students in public schools as well as with stroke victims in medical settings. Over the last decade, she has been focused on understanding the underlying factors in student motivation and engagement, as well as the vital roles that connection and relationship play in mental health and education. Over the years, she has developed curriculum, homeschooled, built schools, blogged, coached, and mothered her 4 amazing kids. Kaity also moonlights as "Adventure Kait" in Prenda's literacy program, "Treasure Hunt Reading," which is available online for free at TreasureHunt.Prenda.co to anyone with the internet.

This is a free event, being held live online and also recorded.
REGISTER HERE
to attend live and/or to receive the recording links afterward.
Please also join the LearningRevolution.com network to be kept updated on this and future events.

ACTUAL SESSION ATTENDANCE LINKS WILL BE EMAILED TO THOSE WHO HAVE REGISTERED, AS WILL THE RECORDING LINKS WHEN THE EVENT IS OVER. If you have registered for the summit and can't find your confirmation email with the session links, please click here.

Supporting teachers as they build the microschool of their dreams, in less than a year, without sacrificing salary or sanity. 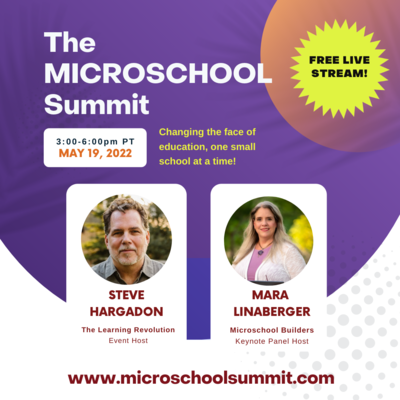 The call for proposals for the 2022 Microschool Summit is now closed.

We encourage proposals that showcase effective examples of microschool planning, implementation, and sustainability. 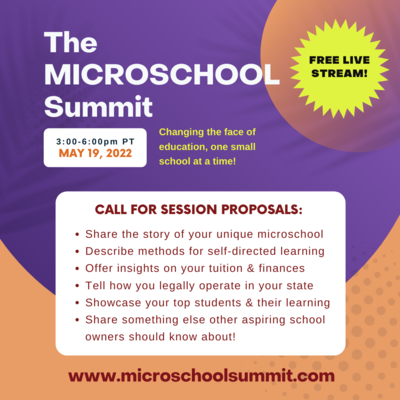